This science fantasy novel in te reo Māori follows four teenagers living on Rēhua, a planet settled after Earth is destroyed by ecological disasters and global war. The four raise hōkio, giant mystical birds, which take them on flights to explore their new world. On one flight, they discover an island with another colony of people, and here, they are given a quest to interpret hieroglyphic messages drawn on cave walls. Deciphering these symbols leads them to appease the feared tipua wheke, a gargantuan octopus, and help the Tūrehu, fair-skinned sea fairies, who have discovered a way to return to Earth. 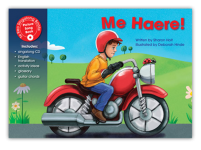 There’s something about a red motorbike that catches your attention, isn’t there? We created this book about vehicles and colours...

Dr Haare Williams MNZM has been Dean of Māori Education and Māori Advisor to the Chief Executive at Unitec.

Words of a Kaumātua: Haare Williams

The witch and her cat fly along in this te reo Māori translation of Room on the Broom.

He Wāhi i te Puruma